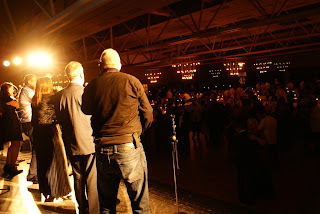 Blues music has always been about transcendence; overcoming the bonds imposed by an oppressive society; breaking through the boxes meant to keep us in our place. People with disabilities are often put in boxes and permitted rare opportunity to shine, but that is changing thanks to United by Music (UBM). Through the UBM project, musically-talented people with intellectual disabilities (ID) team up with Blues artists to develop their natural talents, and then take the stage and sparkle.
The UBM project, originally developed in The Netherlands several years ago by Candye Kane and Joris van Wijngaarden, has migrated to the United States. UBM participants will be opening each day of the Waterfront Blues Festival in Portland, Oregon, this year on the Delta Music Experience Backporch Stage and will also be featured on the main stage. This summer’s 10-day tour of the Pacific Northwest and Waterfront gigs are the result of a great deal of preparatory work by volunteers committed to the inclusion of people with intellectual disabilities.
The United by Music initiative began in 2005 when Joris, the CFO of the largest health care network in The Netherlands, invited Candye to perform at a small festival he organized for his company. He included people with disabilities among the guests. Candye invited two singers with IDs to sing with her on stage, and the positive response from everyone present was the inspiration for UBM. After many email discussions between Joris and Candye, a business plan was developed, and the project was off and running. In addition to performances in The Netherlands, UBM has traveled to South Africa for an international conference for people with ID and to Ireland to perform at the International Congress on Down Syndrome.
It was at the performance in Ireland that Barbara Gresham Hammerman (Hammerman Philanthropic Partners) and her daughter Amanda Gresham (Delta Music Experience) from Portland, Oregon, joined up with the group. Barbara recalls, “We were able to experience the training and some of the incredible things that happen, such as learning life skills. Joris is very good at creating a program that requires work. He tells them, ‘Once you’re selected, you’re a professional. Even if you’re not feeling well that day, even if you don’t want to get up, you’ve got to do it. The show must go on!’”
Candye had recommended to Joris that if UBM was to jump the pond and get established in the U.S., that he should involve Barbara, who specializes in launching nonprofit organizations. “I told him there were certain things we needed to do responsibly rather than just jumping into it: find out as much as we can; determine if this is something that’s needed here; decide if we’re the group to do it – basic feasibility questions to start a nonprofit,” Barbara explained.
There are several differences between The Netherlands and the U.S. that had to be addressed in order for UBM to be successful here, not the least of which was a mechanism for funding the program. There, UBM is supported by government funding and corporate sponsors; here, fundraising is all important. Barbara organized focus groups in nine cities to explore the viability of the program. In order to demonstrate what UBM was all about, a tour ensued which included performances by Candye and her band as well as UBM participants from The Netherlands. During a two-week period in 2010, the group hit nine cities in three states and two countries.
The current focus in the U.S. is to develop United by Music in the Pacific Northwest where several Blues artists have lent their support. Seattle-based singer Lady “A” has embraced the program and serves as one of the core artists, according to Barbara. Lady “A,” the Pacific Northwest’s Diva, serves on the musician team which is working to identify and develop the talent and will soon hold auditions in Portland. Karen Lovely, multiple Blues Music Award nominee, is also a member of that team. Janiva Magness, 2009 B.B. King Entertainer of the Year, participated in two of the showcase performances in 2010. Last year, renowned singer-songwriter and BMA nominee Doug MacLeod performed a benefit house concert for UBM.
Barbara describes the motivation driving Joris in his quest to grow United by Music: “He thought there are some of those people who have exceptional abilities who aren’t allowed a chance to soar while in the general population. He wanted to give them a chance to soar.” She says that Joris sees the Blues as the perfect medium, because he felt there was a kinship between the circumstances of the original blues men and women of the South in the U.S. and the people with ID he cares for every day. In his innovative approach to describing them in his non-native English, Joris calls them “historically chanceless people.” 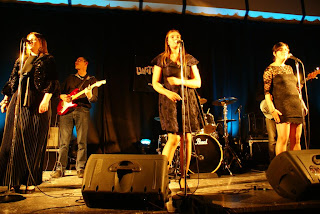 One of the core tenets of UBM is that everybody should have a chance to shine, and that idea drives the organizers as they seek out and develop candidates. Musical director Harm van Sleen works with the artists in The Netherlands to prepare them for the arrival of Candye and her band. Candye records tracks ahead of time that the participants can use in rehearsal. Barbara says that Portland-area musicians such as Kevin Selfe, Lisa Mann, and Vicki Stevens have expressed their interest in participating and may host workshops and provide training to help the U.S. participants ready themselves for the stage.
Barbara envisions the growth of United by Music in the U.S. as a hurriciane. “I have a very tight core of the business plan, and it’s swirling in the middle and very tight. We only let it branch out as it’s strong enough to do that. Think of it as rounds of ‘Row, Row, Row Your Boat.’ While we might be on the third round here in the West, we’re starting the first round in New York, We met with some people there a year ago and then were back in August for ten days and in New Jersey and Rhode island. We’re getting that area conditioned for the next round in 2013.”
If you would like to know more about United by Music, check out the organization’s website at unitedbymusic.org.