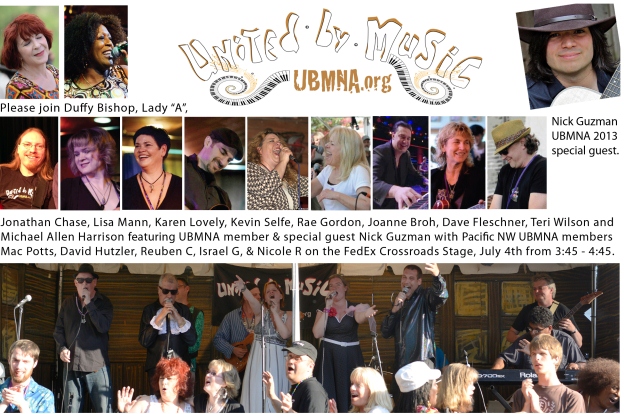 “I wish there was a” love “button (on Facebook ) …
Loved your performances at Waterfront! … so touching and beautiful. I know I was not the only one that was Brought to tears by your passion, talent and genuine love for music Magnificent “
– 2012 Waterfront Blues Festival Guest, Susan Dishaw
“NICK GUZMAN IS AN EXTRAORDINARY MUSICIAN, a kind hearted soul and a blessing to the planet. When he played with the rock great Stephen Stills, Nick was Amazing! What a talent!”
– Elaine Hall, founder of The Miracle Project
The United by Music Revue brings together some of the best professional musicians in the country performing with our United by Music company members for an exciting, enriching and empowering performance of blues, swing, jazz and a taste of rock ‘n roll.  Plus, from California, guitarist Nick Guzman, a young man whose Autism has not defined him.
Safeway Waterfront Blues Festival is a proud supporter of United by Music North America, which Barbara Hammerman, co-founder and president calls “The Special Olympics of Music”.
About United by Music: Imagine a world in which no prejudice exists based upon race, creed, color—or intellectual capacity. That is the world that we at United by Music North America, and our growing support base, envision. In our case, we have turned to the power of music to bring people together.
Portland, Oregon was selected as the pilot city in North America to launch United by Music. United by Music began in The Netherlands by founder Joris vanWijngaarden with the help of American blues singer, Candye Kane. Amanda Gresham’s Delta Music Experience, Waterfront’s DME Blues Cruise sponsor, is the producing sponsor of UBMNA ” We aim to improve the quality of life for members of our company and challenge public attitudes about people with an intellectual disability showing that we are more alike than we are different and profiling the exceptional talents of our company members”, says Amanda.
United by Music is a performance-based program for musically talented people with intellectual challenges such as Autism, Aspergers, and Williams Syndrome. At the core of our model is collaboration with other similarly missioned groups to provide opportunities in performance. We are excited that our 2013 performance at Waterfront features a collaboration with the California-based Miracle Project, an organization formed to provide autistic performers with opportunities to express themselves in the creative arts. Nick Guzman, a performer with the Miracle Project who recently performed with Crosby, Stills and Nash at a benefit for AUTISM SPEAKS will perform with the United by Music company on July 4th at Waterfront.